If you watch Building Massachusetts December 2nd at 1pm you will get to see our owner John MacIsaac and if you cant tune in Saturday here is the clip!

Posted by ASAP Environmental, Inc. at 8:25 AM No comments:

A Brief History of Lead Paint Used in Art

Lead is a toxic element that can be extremely harmful to human health. The medical effects of lead weren't well understood until the early 20th Century, and it wasn't until 1978 that the Federal Government banned the use of lead in all consumer paint products. For hundreds of years before, lead white was used in commercially-produced house paint. But the history of lead paint in art stretches back thousands of years, at least to the 4th Century BC. Some of the greatest painters in history used lead paint.

Why Was Lead Used in Paint? 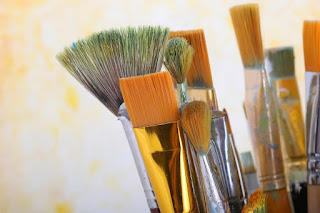 Lead is a heavy element that is highly opaque. In paints, a small amount of lead can cover a large area. Lead white is especially effective at coating darker surfaces without the underlying color bleeding through. Further, lead is insoluble in water, meaning lead paint is highly resistant to rain and moisture.

What Artists Worked With Lead Paint?

Before the mid-1800s, it's easier to ask which artists did not use lead paint. Because the substance is so capable of covering large areas, it was especially popular with fresco and mural painters. It is widely believed that Michelangelo suffered from lead poisoning. Vincent Van Gogh and Francisco Goya are two others suspected to have been afflicted with (and, some say, inspired by) the delusional effects of lead poisoning.

When Did the Use of Lead Paint Decline?

In the 19th Century, lead white, vivid yellow lead chromate, and other pigments in artists' paints were phased out in favor of compounds using zinc, titanium, and other elements. Commercial use of lead paint peaked in the late 1920s when the medical consensus against the substance could no longer be ignored. The paint industry undertook a voluntary phase out in the 1950s, and by 1978 the material was completely banned. In 2010, the Federal Government passed the Lead Renovation, Repair, and Painting Rule, or RRP Rule. Under this rule, anyone at risk of coming into contact with lead paint (through work on pre-1978 housing) must follow a number of regulations designed to protect human health.